Donation to a school in French Polynesia 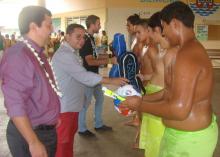 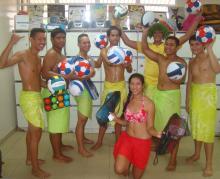 On the occasion of the ISF Executive Committee and the ISF World Schools Championship Beach Volleyball 2017 in Papeete, French Polynesia, the School Sport Foundation donated sport items to a school selected by the USSP (Polynesian School Sport Union).

The College Maco Tevane, run by Mr. Yves Rautureau, benefited from a donation of sport equipment. This donation is a humble reward for all the efforts and projects the school has launched to promote better inclusion among the youngsters. A particular attention to this school in which most of the students are from underprivileged areas and can feel outcasted. Nevertheless, the programme that the school has recently established by giving more priority to arts and sports to avoid self-depreciation and boost self-confidence, under the impulse of Mrs. Ingrid Neveling.

Group of student welcomed and performed local dances. They received sports equipment from the President of the School Sport Federation, Robson Aguiar; The General Director of Education, Thierry Delmas and Jean-Philippe Rico, the Director of the USSP.

This donation was also made in the context of the organisation of the World Schools Championship Beach Volleyball in which many of the students are involved as young volunteers.